App for learning to read and to help practice spelling words.This app must be loaded on a FAAST iPad

Alpha Writer  is a $5 app from  Montessorium . Provided is a description of the app and a personal review from a user-

While both my daughters had some fun with Alpha Writer , only my 4-year-old really understood the app’s focus—it was mostly over my 2-year-old’s head. It’s meant for kids who are learning to read, to help them practice spelling words.

The app has two modes. In Alpha mode, you’re presented with a grid of 50 colorful icons—a lamp, a dog, a jet, and more. Tap one, and you land on a new screen featuring that object, a horizontally scrolling alphabet, and not much else.

A pleasant female voice announces the object’s name (“lamp,”) and then pronounces it again, focusing on the phonetics (“ull a mmm puh”). You’re meant to drag letters down from the horizontal strip to anywhere on the screen, to spell out the word you’re hearing. Drag down the wrong letter, and you’re very subtly coached. (“I hear ‘ull a mmm puh.’”) You can drag erroneous letters back up to the bar to discard them.

As you drag letters down, you hear their sounds voiced. The app doesn’t offer any additional corrections or help—this is really an educational tool meant to be used by you and your kids together. When you tap the checkmark to indicate that you’ve finished spelling a word, there’s no overt indication of whether you’ve spelled it correctly or not. The app only repeats the name of the word you’ve spelled when you press the checkmark if it’s spelled correctly, but that’s a very subtle cue.

With some words, like “ship,” Alpha Writer wants kids to figure out the “sh” sound, but of course the “s” and the “h” don’t make those sounds when tapped individually. Again, while you can certainly hand this app off to your kids if you want to distract them for a few minutes, you’ll want to stay by their side if you’re hoping to teach them something.

In the app’s second mode, Writer, kids can create “storyboards” by dragging objects and letters onto the screen. You can resize and reorder each object, inventing whatever narrative you’d like to accompany your storyboard. My 4-year-old loved this part.

My kids and I encountered a couple freezes with Alpha Writer on occasion, where the game stopped responding until we restarted it. But overall, it’s very well-designed and smartly implemented. I don’t mind sitting by my daughter’s side as she uses the game, though I wish it would provide a bit more feedback for her itself regarding how she’s doing with spelling words.

There are no reviews yet.

Be the first to review “Alpha Writer App” 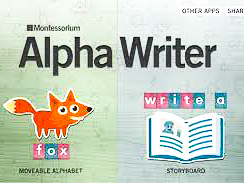